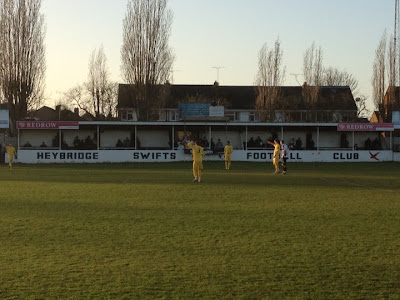 So it seems that I am back in the game.
After a four year hiatus for the Groundblogger, during which time I got a season ticket for Derby and watched a whole bunch of Championship football, and then started running an Under 9s team which dominated my weekends, I am back.
It all came about when I celebrated my 40th birthday down in Dorset. My Dad (800 grounds plus) took me to Hamworthy United, and then to Moneyfields, and then I snuck off to Potton United Reserves, and then I went to Wimborne Town, and then I bought a copy of the Non League Paper... You know how this one goes.
So this Saturday, I dragged my middle daughter off to Heybridge Swifts to visit my nearest Isthmian League ground, having never been there before, and having only seen them once before in 1980 at Halstead Town back in the Essex Senior League.
The opposition was Potters Bar Town, who bizarrely are now my most watched away team, as I've seen them at Arlesey, Wivenhoe and Ware beforehand, and the three-nil victory that they ground out was a bit harsh on the Swifts who lost a lot of heart after the first Town goal went in.
It was brass monkeys, and the picture that I took was iPhone only and not DSLR, but it's official I'm back. I've even started blogging again. In case you've missed it.
Posted by John Stoneman at 21:43 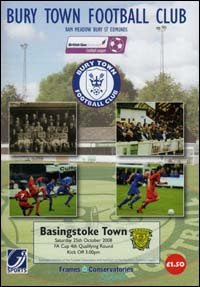 Took in a Fourth Qualifying Round game at Ram Meadow on Saturday, you can read a full report and check out the pictures by clicking here.
Posted by John Stoneman at 19:58

Took in a Preliminary Round Replay at Goffs Lane on Tuesday, you can read a full report and check out the pictures by clicking here.
Posted by John Stoneman at 12:35